Some domestic workers are contributing to feminism, working for equality and against gender-based violence 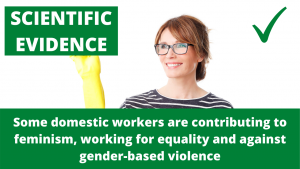 Today is International Domestic Workers’ day. According to the statistics presented on several reports by the International Labour Organization, domestic workers in all around the world are mostly women (80%), but also, a great part of them are immigrants and is considered one of the most vulnerable groups of workers. These hardworking women often suffer from exploitation and are considered at great measure vulnerable to physical, mental and sexual abuse. But also, this collective has often found themselves excluded from feminism by those so called “feminists” who believe that being feminist is only about aspiring to powerful and important positions in the workplace.

I can recall some women who did not think of themselves as feminists just because other women who thought they were, had told them things like being a domestic worker was against the ideals of feminism. Someone had told them that they had to change their ambitions beyond being housewives or mothers in order to be feminists.

Feminism requires the voices of the diversity of women from all backgrounds, from all cultures, from all types of work who, with a common sense of freedom, seek equality across differences.

Does anyone have more evidence on this, or do you have data on domestic workers struggling against gender-based violence and/or gender equality?