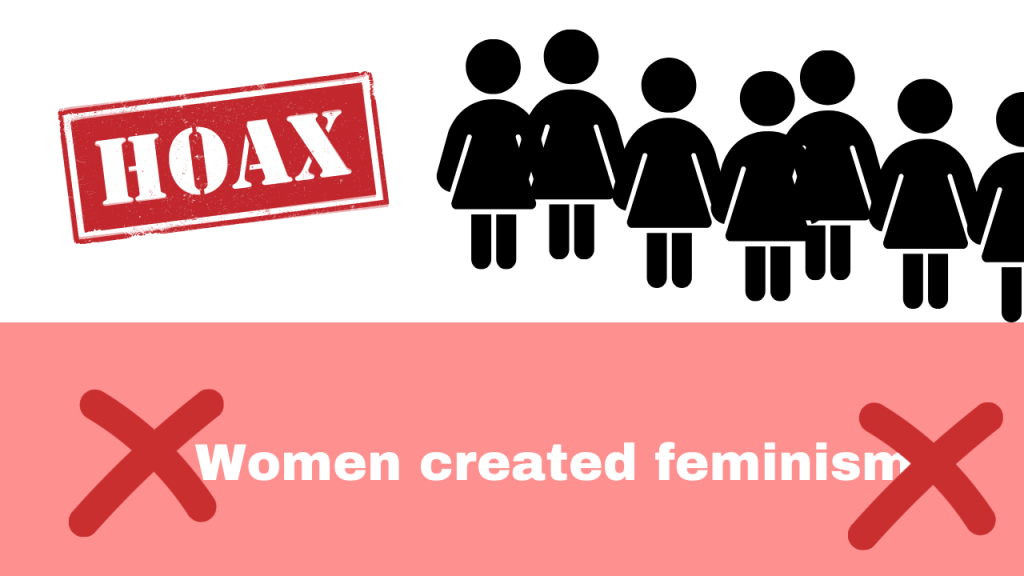 There is a very widespread idea that says that women created feminism, which, with its advance, gradually dislodged the men who had always dominated us, and now some want to change and we help them to build new masculinities.

“Women created feminism” This statement is a hoax. Since the beginnings of feminism, both women and men have participated in favor of women’s rights. Moreover, this fact is found in different countries and by diverse profiles of women and men in terms of political ideologies or religious beliefs. Both women and men have contributed to gender equality and women’s rights, by either writing philosophical works or political treatises that inspired legislative reforms at the time or by participating in social movements that were precursors to later feminist causes.

In the 17th century, we find remarkable male authors such as the philosopher Polain de la Barre. In 1673 he published the work “”De l’égalité des dux sexys”” and in 1674 “”Traite de l’education des dames””. Two works that are considered as precursors of the illustrated thought in which he defends access to education and knowledge for women to achieve progress and avoid inequality. Later, in 1787 Nicolas de Condorcet published the letter “”Letters from a Freeman of New Haven”” in which he already defended the rights of women. Two years before Mary Wollstonecraft published “”A Vindication of the Rights of Woman,”” Condorcet wrote “”On the Admission of Women to the Rights of Citizenship”” (1790) in which she criticized politicians and philosophers for disenfranchising of rights to women, the half of humanity. In Germany, the philosopher Von Hippel wrote in 1794 “”On the Civil Improvement of Women”” in which he advocated the political participation of women.

In the US and UK, the struggle of the feminist movement for women’s rights has been historically linked, since its origin, to the movement for the abolition of slavery in the 18th and 19th centuries. The abolitionist crusade involved both men and women. In its development was very important the protestant religious influence and especially of the Quaker society. By participating in favor of the emancipation of slaves, women realized the gender inequalities they suffered. Many abolitionist men took a stand against not only the injustice of slavery but also the discrimination against women. Some men opposed women’s political participation in the anti-slavery struggle, but others supported and defended women’s participation. For example, the famous abolitionist and social reformer William Lloyd Garrison, founder of The Liberator newspaper and the American Anti-Slavery Society, argued that the abolitionist struggle should be joined with the struggle for women’s rights. When the World Anti-Slavery Convention was held in London in 1840, women were banned from participating. Despite this, American anti-slavery organizations in which the majority were men, appointed some women to attend the convention as their representatives. Lucrezia Mott and Elizabeth Cady Stanton were two delegates elected to attend the London convention. When they arrived in London, they were banned from the convention and were only allowed to attend as spectators from a gallery. Other men protested and William Lloyd Garrison, in protest, joined the gallery where Lucrezia Mott and Elizabeth Cady were relegated. When they returned to the U.S., Lucrezia Mott and Elizabeth Cady, along with other abolitionists and pro-women’s rights colleagues, organized the Seneca Falls convention in 1848, a precursor to what is considered the first wave of feminism.

In the UK, the contributions of John Stuart Mill are also noteworthy. The philosopher, economist, and political scientist not only wrote some important works in philosophy but he was also a member of the British Parliament. With his activism, in 1866, he presented a petition to the House of Commons in favor of women’s suffrage. In 1869 he wrote The Subjection of Women. The work is considered one of the most important in the history of feminism. Stuart Mill denounced the oppression of women as an impediment to the progress of humanity and defended the education of women. He also opposed to prostitution and sexual exploitation of women. In 1870 in the British Parliament, he defended that traffickers and male clients of prostitution should be targeted and blamed for contagious diseases instead of persecuting prostituted women because they were victims. A later review of Mill’s work suggests that his valuable philosophical contributions were not taken into account at that time as they should have been because he had positioned himself in favor of the feminist cause. Other male philosophers such as Auguste Compte criticized Stuart Mill for defending women’s rights. Finally, Mill was consistent with the arguments he defended and his private life. Stuart Mill was in favor of marriage reform and questioned the domestic tyranny in which many women lived in marriage (Ward & McGlynn, 2015). When he married fellow feminist Harriot Tylor, on his wedding day, he prepared a document that presented before a notary in which he renounced the privileges that the law granted him as a husband over the life of his wife