The women’s right to vote 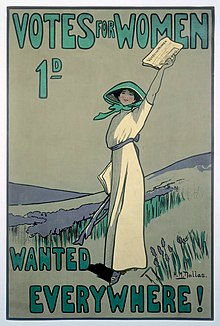 October 19th is the celebration of the 88th anniversary of the first-time women were able to vote in Spain. On November 19th, 1933, general elections considered for the first-time women’s suffrage. Women’s suffrage had been recognized earlier in 1931. On October 1st of that year the Cortes debated and finally voted in favour of granting the right to vote to Spanish women.

While some feminists as Victoria Kent defended the exclusion of women (considered too influential) on defence of Republic over women’s suffrage in the general courts, Clara Campoamor had been struggling to achieve the women’s suffrage. On the October 1st during the debate she made an historical speech addressed to those who were reluctant to give the right to vote to women: “You have the right that the law has given you, the law that you made, but you do not have the fundamental natural right, which is based on respect for every human being, and what you do is hold power; let the woman manifest and you will see how that power cannot continue to stop it.”

As it is mentioned in the largest and most cited scientific contributions on this topic, women’s suffrage overcame politics towards inclusion and a new conception of citizenship emerged.