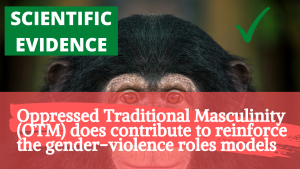 Despite the common vision that all non-violent masculinity model suppose an advance towards the overcoming of gender violence, there is strong theoretical and empirical evidence that Oppressed Traditional Masculinity, which is subordinated to the Dominant Traditional Masculinity (DTM) reinforces the double standard masculinity model that underlies gender violence. These masculinities do not confront dominant traditional masculinities and often accept romantic relationships with women who have not sexual attraction to them, but to violent models of masculinities. This instrumental, passionless relationships reinforces a model where sexual desire is linked to violence whereas good values are associated with a stability lacking sexual arousal. Moreover, OTM guys might turn into DTM when they see that good values makes them not sexually desirable, the opposite effect observed with NAM. Dominant Traditional Masculinities, who are the ones perpetrating gender violence, needs OTM as a justification and do often use them for their own purposes.

The evidence mentioned on this post has serious implications for educational programs that aim to prevent gender violence and/or to promote gender equality, since they often leave out the fact that the attitudes and actions of NAM do make a difference, as oposed to the passiveness of MTO in front of violence, inequality or even abuse.

In this issue, MTO, who has the ethics components, does not incorporate security and courage and the breaking of double standard, in this way, helps increase the attractive of MTD, Hegemonic masculinity.